This is a log of the steps I took to paint my third set of miniatures: 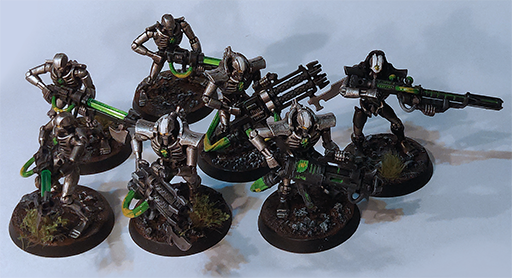 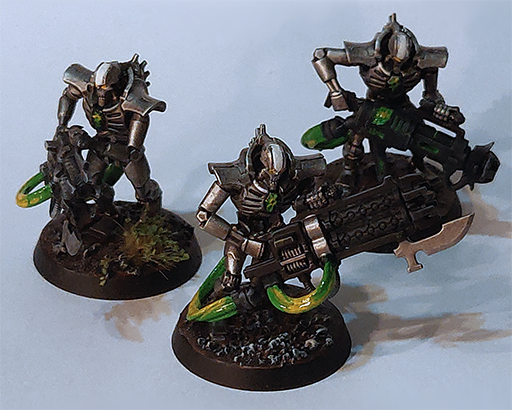 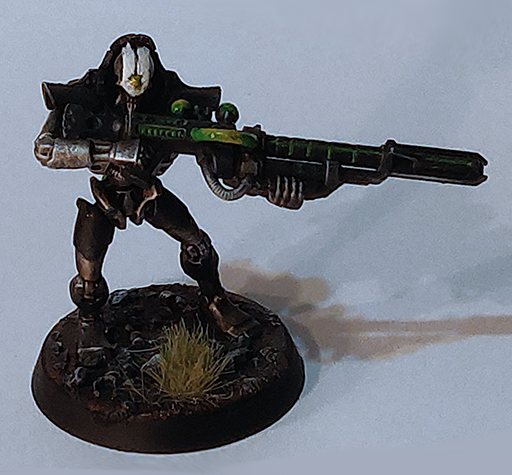 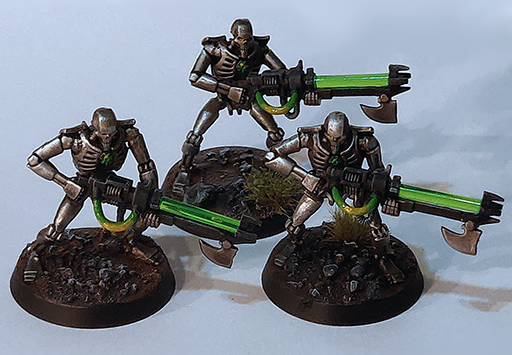 Assembling the ball-and-socket joins (such as for the shoulders and torso) took some getting used to. For the shoulders in particular, I would glue the hand holding the gun, using the cables for support if the model had any (Immortals did, the rest didn’t). Then, while the glue was still wet, I would fit in the smaller hand and slightly move the weapon around until the smaller hand would fit. Fiddly, to say the least.

I did NOT attach the transparent green tubes, as instructed by the booklet. That will be done later, after the Warriors are fully painted.

Next step was to base the miniatures, using kitty litter, baking soda and super-glue, similar to the process done for the Primaris Reivers.

The only difference was that I used smaller pieces of kitty litter. After applying the glue, kitty litter and baking soda, I would flip the miniature and tap on the bottom. Then, once everything was completely dry, I would brush off the excess baking soda and then blow on it a couple of times.

Primed both the miniatures and the bases using two layers of Abaddon Black.

Applied two layers of Leadbelcher for the armor and sections of the weapons (such as the blades on the Warriors), with special care for the Deathmark (who has a lot of black pieces of armor).

Applied a single layer of Mournfang Brown for the ground, then a layer of Eshin Gray for the boulders. Tidied up the armor with Leadbelcher, if I got any of the brown on it. 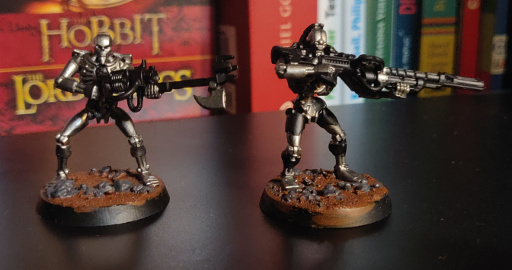 Applied a layer of Nuln Oil to both the miniature and the base.

Applied a light drybrush of Ulthuan Grey to the base, trying to mostly highlight both large and tiny boulders (but not completely cover the Eshin Gray). Ideally, you can still see the brown and both grays, as well as dark areas where the Nuln Oil gathered (such as under larger rocks).

Applied a drybrush of Runefang Steel to the miniatures in order to bring back the metallic sheen of the more exposed areas of the armor, while maintaining a darker, non-reflective gray in the shadows (Leadbelcher, darkened down with Nuln Oil).

Applied a layer of Moot Green to the indentations inside the weapons of the Immortals and Deathmark. Wasn’t very precise about how I applied this, but I didn’t get any green on anything that’s not black.

Re-applied Abaddon Black to the weapons and the Deathmark armor, repairing any errors I made in the previous steps and using the raised edges around the Moot Green areas in order to leave the insides green. This didn’t work for the Gauss Blasters (the indentations weren’t deep enough and I got black in them), so I repainted black over the Moot Green.

Applied a layer of black to the base edges, cleaning up the previous work I did with the brown and gray.

Highlighted all of the weapons and the Deathmark’s armor with a drybrush of Eshin Gray, followed by a lighter drybrush on Ulthuan Gray on the most raised edges.

Applied a layer of Yriel Yellow as a highlight to various areas of the weapon tubings and chest logos, as well as the eyes.

Applied a coat of ‘ardcoat (without thinning it) to the weapon tubings, as well as the Deathmark’s eyes and spheres around his armor.

Cleaned up any mistakes I made at this point using Leadbelcher.

Glued the green tubes for the Warrior weapons using Mod Podge. Had to file away the edges of the tubes in order for them to fit inside their slots. Took care to glue the spot where they were attached to the sprue toward the bottom of the slot, in order to hide the mark.

Glued some Green Stuff World tufts and bushes to some of the bases using Mod Podge.